Liverpool’s midfield: The good, the bad and the in between – Liverpool FC


Liverpool’s lineup on Monday had more changes than would normally be expected in just game two of the season, though in midfield it was as much by necessity of performance as fitness.

There’s no question that the centre of the park is the area of greatest intrigue and questioning among supporters heading into the new campaign, so it bears keeping an extra-specific eye on as it develops in 2022/23.

Expectations of a new signing have not materialised, despite heavy links with a least three players in that area of the pitch, with Jurgen Klopp insisting he’s happy with the eight or so – depending on your classification of one or two in the squad – that we have.

Ironically, the 11 against Palace showed more concerns in attack and defence than in the middle: down to fifth-choice centre-back already and with no forward of any real note on the bench, even before Darwin’s delirium struck.

Midfield definitely had a non-strongest-side vibe about it, yet performance-wise in the first half it was actually perfectly decent from the two more advanced players.

Much more energy and aggression, total domination in Palace’s half (75% possession at the break), 17 shots to four, the ‘net’ around their penalty box making it nearly impossible to break out. Except for, you know, when they scored.

In the immediate aftermath of the whistle, fans voted Elliott (7/10) as the best of the crop, with Milner (5) and Fabinho (5) less impressive. The result, undoubtedly, has some sway here. 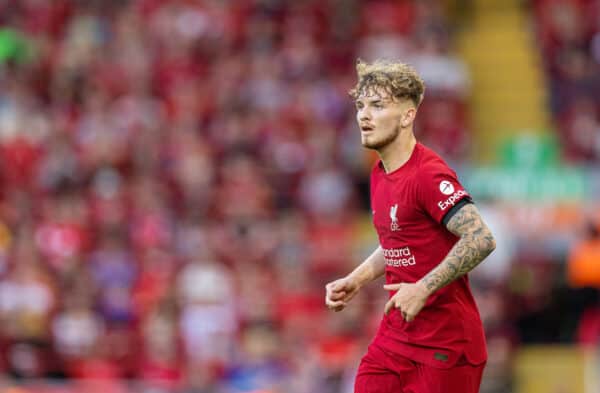 Let’s revisit that first half again, which the Reds somehow trailed after.

Elliott was relentless, topping the Reds’ numbers at the interval with two interceptions, five attempted tackles, four of them won – and even ranking second for shots (three) behind Darwin.

He was excellent throughout with intelligent movement, positive play and getting into the box and is one of few who should be in the team due to form right now, even without considering he is one of few who remains fit. 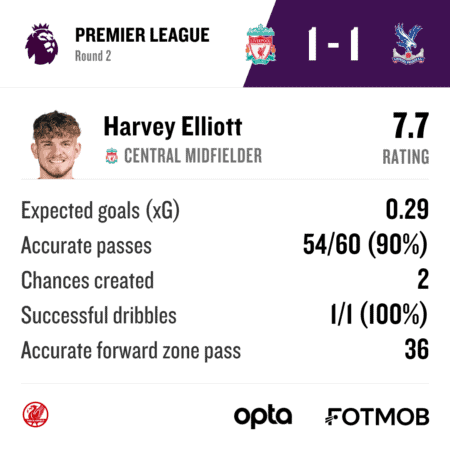 The best parts of Elliott’s games are often in how quickly and smartly he releases play, before moving on and getting himself into the next dangerous position.

We’re not going to see huge dribble volumes from him from the 8 role, but a whole lot of chance creation and – as he gets older – it’s a safe bet his shot count will increase significantly. 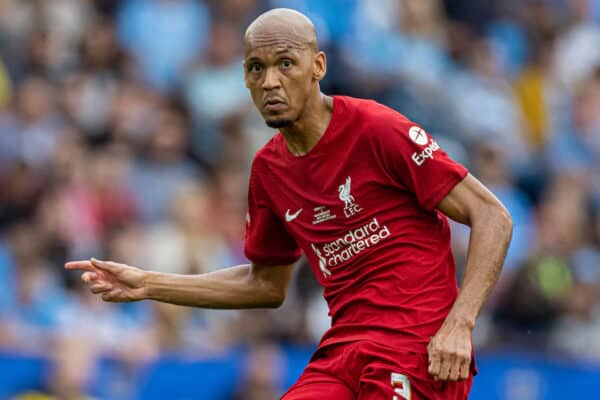 Of more concern was Fabinho: bypassed on the dribble several times, usually one of his biggest strengths, including in the build-up to the goal.

That move specifically was excellent from Eze, and sometimes you have to simply accept Premier League players are very good and you cannot stop everything – see Palace’s superb organisation vs. Luis Diaz‘s ridiculous solo goal later on – but even so, Fabinho was again well off the pace in general.

He hasn’t started the campaign well, his ball-winning numbers are down from last season’s average by a considerable distance (even allowing for a wide variance in percentages from different stats sources) and his ball use is usually rather more progressive than it has been. 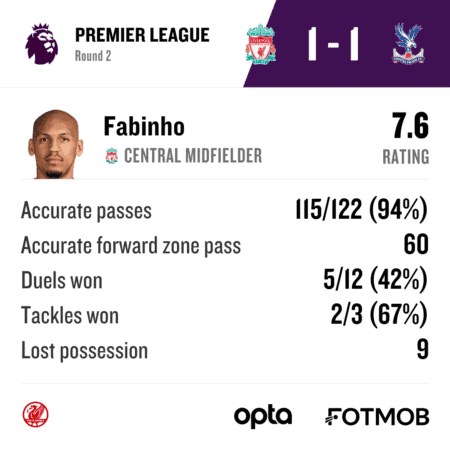 The positives in terms of the Brazilian come in the fact that while he has had down spells of form previously, he’s usually very quick to rediscover top gear. Longer-term, there should of course be no worries over our No3 and his contribution to the team.

Away to Man United wouldn’t be the worst time to put it all together, mind.

Milner: Somewhere in between 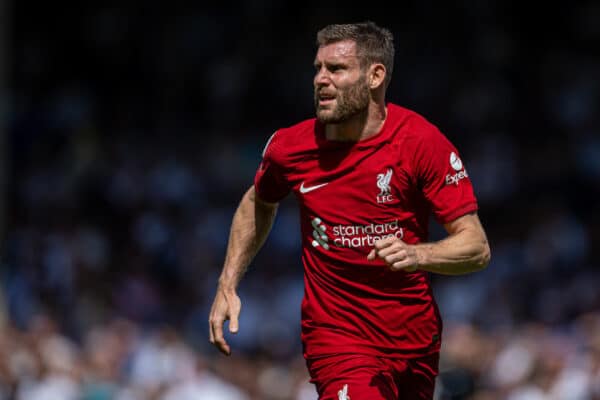 As for Milner, skipper on the night, he was somewhere in between: not terrible, not incredible, indeed pretty much what that second central midfielder is for the Reds (when Thiago isn’t playing anyway).

His job is part support, part ball-winning, part recycling and part everything else, and he did it in routinely fine fashion for the most part. Not a performance to win the game, also not one to lose it.

In weeks to come people will look back at the stats with puzzlement and wonder: “when did Milner get an assist?” Yes indeed, it was he who played a five-yard rolled pass to Luis on the touchline, before the Colombian beat five players and scored. 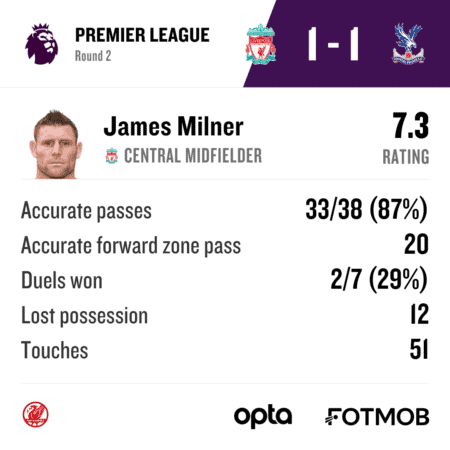 That said, he came off second-best a little too often in his one-on-one battles, which isn’t a terrible problem when a lot of those occasions came with the Reds swarming two and three to a single Palace attacker.

Isolate him though and we’ve known for years it’s not a recipe for success too often. Credit further goes to Milly for getting Darwin off the pitch once his head had gone, otherwise we might have been looking at more than three games’ suspension there.

Later on with the subs, tactics almost went out the window given a man less, altered roles for Salah and Diaz and the switches in the middle.

But even so there were some unhappy moments of Henderson squandering passing chances through not using his left foot, lofting balls to nobody, and Fabio Carvalho showing the obvious inexperience he has in decision-making.

Competition for places isn’t quite a ‘thing’ at the moment: our unused subs were a recovering Naby Keita, third-choice ‘keeper Adrian and three youngsters, the most experienced of which was four-game Sepp van den Berg. 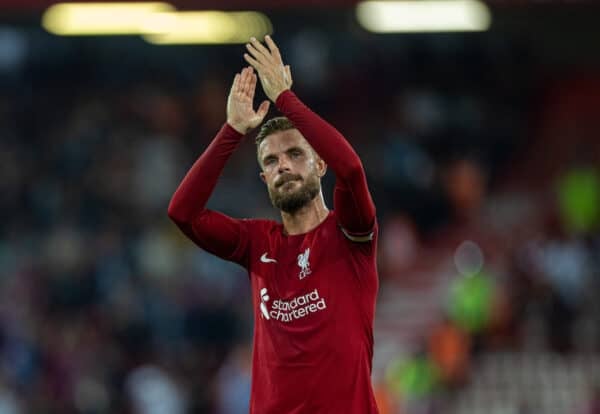 There will almost certainly be another change in midfield for next Monday night.

Milner was perfectly fine for most of this performance as the functional, recycling second sitter with sporadic bursts forward, but Klopp’s post-match comments seemed to hint that Henderson would have started anyway if completely fit.

Elliott must start though. With other attacking midfield options limited, he’s in-form, confident, has an eye for a shot and links extremely well with the two players down that right channel, and should be one of the Reds’ best weapons against United.

Just as Liverpool fans were facing up to two more dropped points on Monday, they were also facing up to one rumoured target being off the table.

Earlier in the day, reports had surfaced suggesting the Reds had withdrawn all interest in Matheus Nunes after an initial enquiry; a few hours later perhaps it became clear why. Wolves have agreed a club record fee for the Sporting man, worth around £38 million.

Barring transfer madness like Barcelona deciding they need him, too, he’ll head to Molineux, following one or two others we’ve been linked with this summer in ending up elsewhere. Not still crying over Tchouameni, honest.

The obvious alternative remains Jude Bellingham, and while we’ll try not to place every single hope and dream we have remaining in a basket shaped like a 19-year-old English midfielder, he has certainly had himself a strong old start to the season.

Two games, two wins for Dortmund and they’re level at the top of the Bundesliga… with him playing a big part in Friday night’s victory coming after falling behind in the first half. It’s almost too neat, isn’t it?