Liverpool wrap up their official pre-season this weekend, but Jurgen Klopp has now revealed another friendly is being lined up after the Premier League campaign gets underway.

The Liverpool boss has spoken of the need to “extend” his team’s pre-season into the new campaign, given the shorter summer schedule they’ve been dealt with this year.

Saturday’s Community Shield clash against Man City will be followed by a friendly against Strasbourg at Anfield the following day, but that won’t be the end of the Reds’ preparations for another gruelling season.

With many of his players still in need of minutes, Klopp has now revealed Liverpool have already scheduled an additional friendly to be played the day after their Premier League opener against Fulham on the first weekend of August. 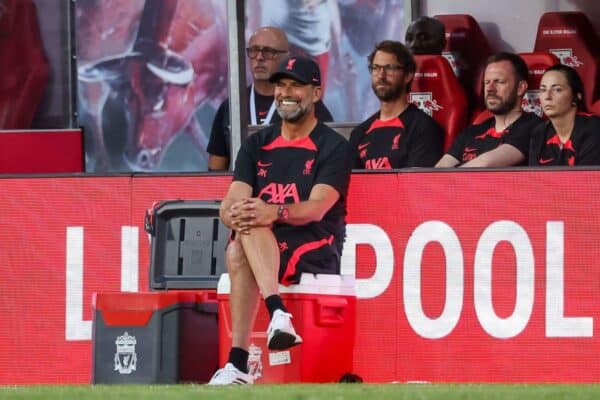 “I cannot ignore the fact that after this important game there is a season coming up, so we have to extend our pre-season into the season,” Klopp said in his press conference previewing the Community Shield encounter.

“We play on Saturday against City and we play on Sunday a pre-season friendly against Strasbourg.

“Then we play Fulham and the next day we play another game just so that we can extend our pre-season. That’s what we have to do, because from mid-August, I think, we play every three days again, so there’s no time for training anymore.

“So we try to do the right things, but of course the schedule is always a challenge to deal with and that’s how it is. It’s not the first time, it’s always like this.”

According to the Echo, the friendly will be a behind closed doors clash against Steven Gerrard’s Aston Villa.

The Reds took on the same opposition in a similar friendly this time last year, one day after their opening day victory against Norwich.

Those who weren’t involved at Carrow Road featured against Villa the next day, and that will be the case again this time around.