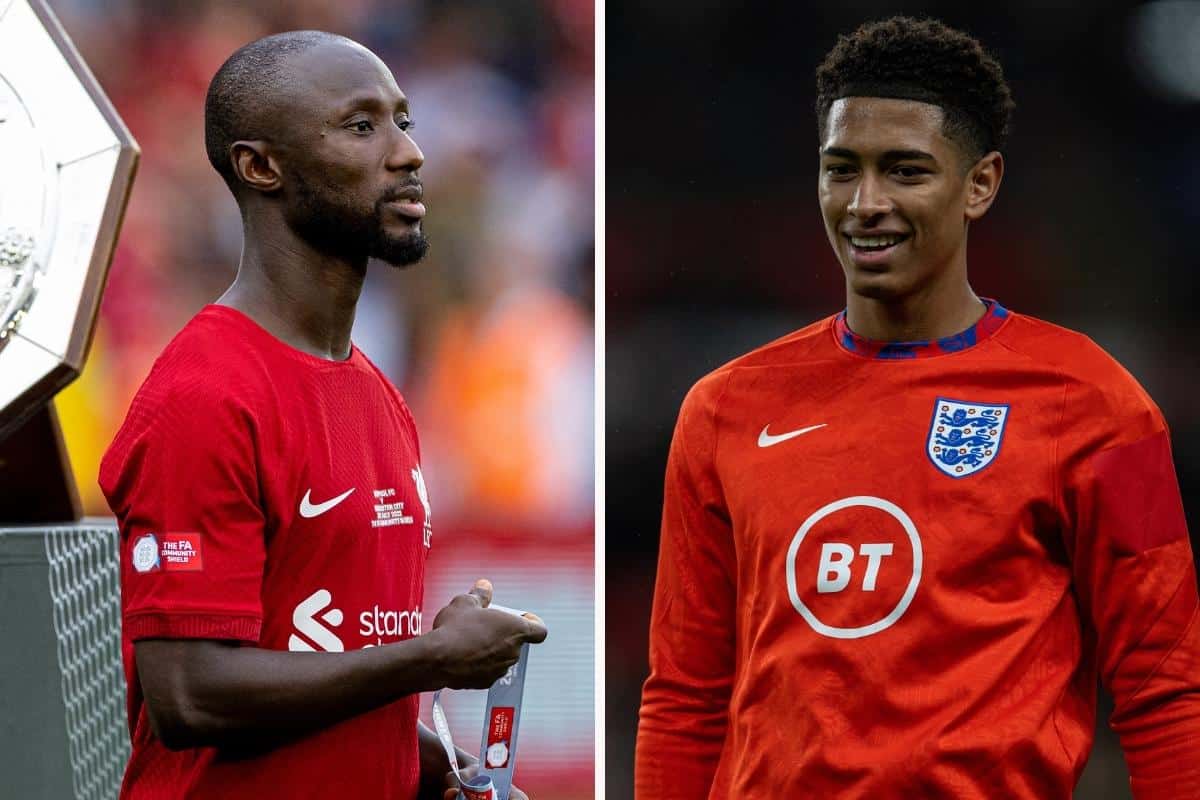 Liverpool fans have been left divided by claims Naby Keita is pushing for a move away this summer, but many are now hoping for a late deal for Jude Bellingham.

It emerged on Wednesday evening, via sources in Germany, that Keita is “unhappy” with his situation at Liverpool and could look to depart before the end of the transfer window.

The news came from Sky Germany’s Florian Plettenberg, and despite contrary claims from Merseyside journalists, there are stark similarities between this and the way in which Sadio Mane‘s switch to Bayern Munich developed.

With Keita and Mane both represented by the Munich-based ROOF, it stands to reason that Plettenberg will have again been in direct contact with their agent, Bjorn Bezemer.

The No. 8 has less than a year left on his contract at Anfield, but it has been suggested that the club are hoping he will agree a four-year extension.

However, the reaction among Liverpool fans has been split, with some hoping Keita could now be used as a makeweight for Bellingham.

The initial reaction was divided…

Liverpool have a near faultless recruitment record over recent years, but if Naby Keita does leave, he has got to go down as one of the biggest failures.

Talented but failed to live up to his reputation #LFC

Only averaged 18 starts a season, so wouldn’t be a massive loss as long as he’s sufficiently replaced.

Classy, intelligent player when fit, but has ultimately underwhelmed overall.

Given the choice, would rather he stays, though. https://t.co/LoeYqyQdxU

I like Keita, but I wouldn’t be heartbroken if he left, provided Liverpool replaced him with a player of similar quality now. All the talent in the world, but just isn’t — or hasn’t been — fit regularly enough.

I have defended Keita a lot over the years, huge fan of him. But the club have not let him down, he’s had plenty of chances and it usually ends with him frustratingly picking up an injury. He’s on a big wage but based on availability i dont think an increase has been earned

It unfortunately just hasn’t happened for Naby Keita at Liverpool. If he isn’t willing to sign a new contract, then it’s best for everyone that we sell him.

If Keïta leaves this summer, we’d be lucky to make Top 4 come the end of the season.

We’d have to sign two top quality midfielders to compete, which we all know will simply never happen.

We’d be lucky to get one, let alone the two we would desperately need.

Just to be clear, if Keita is leaving without a replacement that’s a absolutely awful decision. I refuse to believe even we are stupid enough to do that.

But if a replacement is coming in, I’m all for it. He’s just not gunna be that guy for us unfortunately.

But some are now hoping for a late Bellingham transfer…

Cue the shouts to include Keita in a deal for Bellingham ….

Give Dortmund Keita and £££ for Bellingham right now.

I know this WON’T happen but what if #Liverpool use Naby Keita + £££ to get Jude Bellingham. #LFC ? pic.twitter.com/vLLqD8D28i

What about a wee Naby Keita and Jude Bellingham swap plus money deal? Sounds so appealing. #lfc

Naby Keita has never really won Klopp’s trust. He is a good player as a squad option, but never good enough to command a place in the side. Offer him to Dortmund with cash for Bellingham.

It seems unlikely that Dortmund would accept a player-plus-cash deal for Bellingham this summer, particularly so late in the window and having already sold Erling Haaland to Man City.

But the prospect of Keita departing is not farfetched, with the same situation already unfolding when it came to Mane’s eventual switch to Bayern Munich.

One thing is certain, though: if Keita does leave Liverpool this summer, a replacement must be brought in.