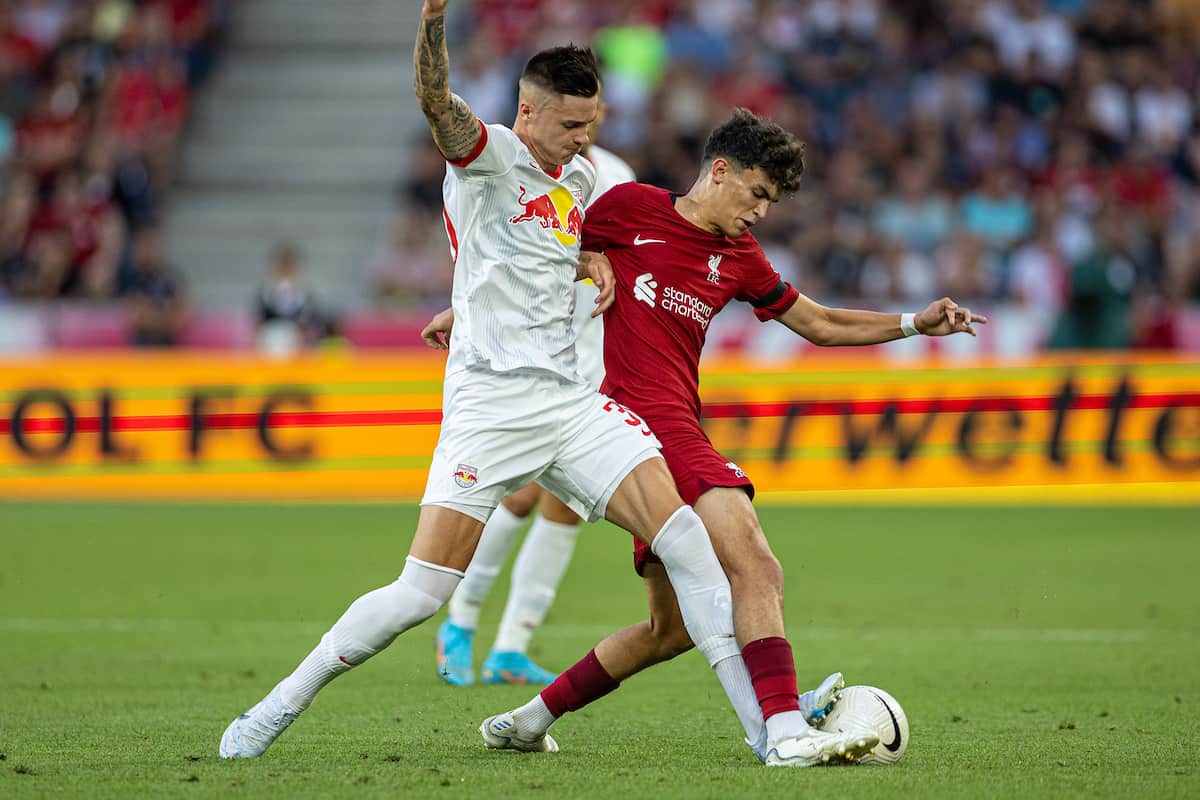 Going into pre-season, few will have been overly familiar with Bajcetic, who only played his first full campaign at academy level last time out.

But the Spanish-Serb has been one of the success stories of the summer so far, with strong performances against RB Leipzig and Salzburg over the past week.

Signed from Celta Vigo just before the Brexit deadline in early 2021, Bajcetic has been converted from a centre-back to a No. 6, with his apprenticeship continuing against Man United and Crystal Palace.

Wednesday night’s trip to Salzburg marked a first senior start for the teenager, who reflected on a “happy” moment on Instagram.

It was an encouraging night for many fans watching on, too, taking to Twitter in their numbers to hail Bajcetic’s early impact.

Bajcetic doesn’t play like a 17-year-old with no competitive first team experience. Has looked so comfortable and composed this pre-season. Silky technique on the ball and really adept at winning it back.

If you’re smart, you put stocks in Stefan Bajcetic.

Just seen a comp of Bajcetic from today and we’ve actually hit the jackpot idc. It’s crazy that he’s only 17. Of course there’s still a few things to work on but he’s got everything to make it with us.

Bajcetic is oozing confidence and composure. In one of those footballing states when everything comes off.

Stefan Bajcetic has done a couple of things tonight that has already got me very giddy!!

Bajcetic is soon going to be knocking on Jurgen’s door. That kid is sheer quality ?? #LFC

You see the way Bajcetic receives the ball on the half turn pic.twitter.com/eD76y5FgXr

Bajcetic receiving the ball with ease on the half turn, he’s pep ljinders dream

I dont expect to see much of Bajcetic this season, but he looks a cracking talent. Always looking for the ball and receives on the half turn every time, and moves it forward more so than safe, sidewards passes. Very Spanish… https://t.co/Ork9aWvemX

Player that’s surprised me the most this pre-season is Stefan Bajcetic. He’s big and he’s strong in the tackle, he’s always looking over his shoulder and when he passes the ball he zips it into feet with pace. Doesn’t look out of place at this level and Klopp can see that ? pic.twitter.com/QbxtNQpH60

Bajcetic might genuinely be the best bit of academy business we’ve made in the Klopp era. And that’s including the likes of Elliott and Gordon

While it would be wrong to go overboard on a handful of pre-season performances from a 17-year-old with no first-team experience, it is clear that Bajcetic is a talented player.

He was one of the standouts in the academy last term, particularly following his switch to midfield, and could take a big step forward with the under-21s this time out.

It remains to be seen whether he will skip straight to the first team, as many clearly hope, but these outings against Leipzig and Salzburg – two Champions League sides – could stand him in good stead.

For now, though, it will be a patient approach with Bajcetic, whose career is still very much in its infancy.

Let’s perhaps not go “all in” just yet!