After a 5-0 win against RB Leipzig, Liverpool now embark on a gruelling training camp in Austria, and one Liverpool defender has revealed the “only way” the players get through it.

The Reds ramped up their preparations for the new campaign in style on Thursday, with four second-half goals from new signing Darwin Nunez helping them to an emphatic victory in their third pre-season friendly.

The win marks the beginning of what will be a tough week for the players, with multiple training sessions to take place on a daily basis in Austria.

It’s an extremely important stage of Liverpool’s summer schedule, but not one the players “look forward to.”

That’s according to Andy Robertson, who openly admits the Liverpool squad struggle to get too enthusiastic about this stage of pre-season. 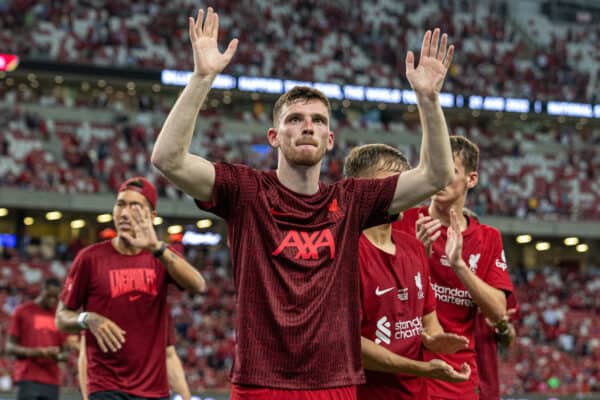 “I don’t think any of us look forward to Austria,” Robertson admitted to LFCTV after the victory at the Red Bull Arena.

“It’s always where it gets ramped up a little bit, it’s always that wee bit harder, but so important.

“That’s always where the foundations are laid, it used to be Evian and now it’s Austria, it’s the exact same.

“Tough sessions, trying to get us closer to where we need to be for the first game of the season.”

“My time,” is how Jurgen Klopp likes to describe these camps. Nothing but time on the training pitch, something that was hard to come by last season, with Liverpool playing every possible match in every competition. 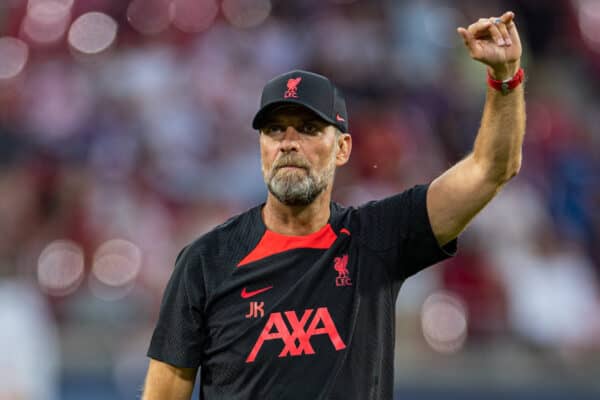 The Liverpool boss will push his players to their limits, and Robertson says there’s only one way to get through the fatigue that comes with them.

“All I’m thinking of is by the end of the week we’ll be in a much better position, that’s the only way you get through it,” the Scotsman continued.

“It’s good team bonding, obviously. Trying to get through it together, pushing each other, getting fitter together.

“It’s always good, not enjoyable but always good and we look forward to the hard work.

“Like I said, by the time we’re flying home, we’ll be in a much better place for the season to start.”

The camp will conclude with a friendly against Leipzig’s sister club Red Bull Salzburg, before Liverpool return home to prepare for the Community Shield against Man City next week.