Liverpool have confirmed the 31-man squad flying to Germany and Austria for friendlies against RB Leipzig and Salzburg, as well as an extended training camp.

The Reds are into part two of their pre-season preparations, having returned from a commercial tour of Asia and set their full focus on training.

This week takes Jurgen Klopp and his players to Austria via Germany, with two more friendlies lined up along with a week-long camp under the Alps.

A total of 37 players flew out to Thailand and Singapore, and a similar number have been named in the next travelling squad.

Alex Oxlade-Chamberlain and Diogo Jota are omitted due to ongoing injuries, but Alisson and Joe Gomez have been passed fit to fly.

Kaide Gordon part of the #LFC travelling squad, joins Isaac Mabaya and Stefan Bajcetic among the youngsters to fly to Germany and Austria. pic.twitter.com/Wei6LXDGZD

There is a continued opportunity for youngsters Isaac Mabaya and Stefan Bajcetic, while Kaide Gordon is also included, with Klopp using this dedicated training time to further assess those stepping up from the academy.

Liverpool are set to take on Leipzig at the Red Bull Arena on Thursday evening, before a meeting with Salzburg at their stadium of the same name on Wednesday.

After that, they are due to return to the UK for the Community Shield against Man City on July 30, with a friendly against Strasbourg at Anfield the following day for those not involved. 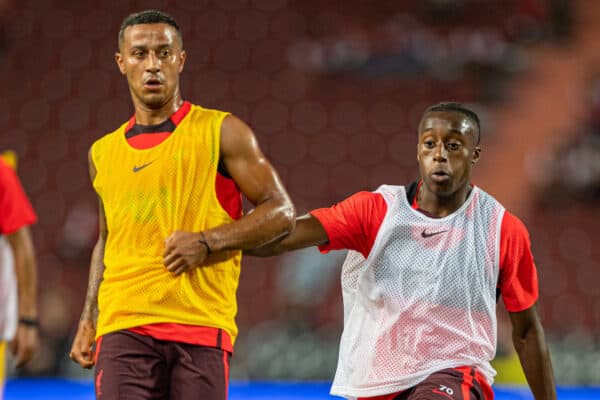