Robbie Keane will wear a Liverpool shirt again as a Legends side takes on Man United in a friendly at Anfield in September, with the first five players revealed.

The Reds are set to play the second of a friendly double-header against United next month, following a 3-1 win at Old Trafford back in May.

Luis Garcia opened the scoring in Manchester before a double from debutant Mark Gonzalez, with the likes of Maxi Rodriguez, Stewart Downing and Dirk Kuyt featuring for Sir Kenny Dalglish‘s side.

Many of the names from that day are likely to reprise their roles on September 24, with a 3pm kickoff in aid of the LFC Foundation.

Thursday saw Liverpool confirm the first five names to turn out for their Legends in the home fixture, including a first-ever outing for Keane.

Keane only spent seven months on Merseyside, scoring seven goals and assisting a further five in 28 appearances, before heading back to Tottenham at a loss. 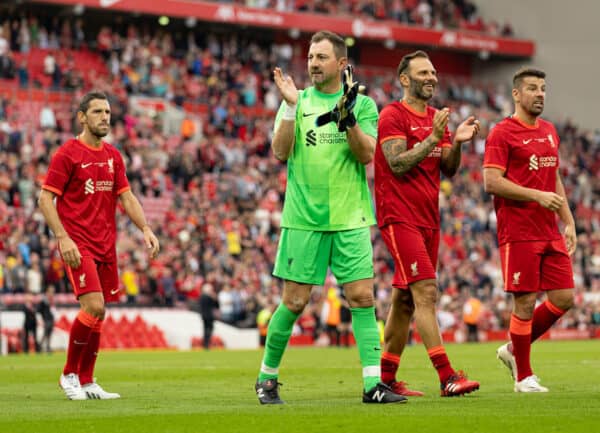 But he will lead the line for a side managed by Dalglish and his assistant Ian Rush, with Jerzy Dudek, Bjorn Tore Kvarme, Momo Sissoko and Steve McManaman also signed up.

Dudek, Kvarme and Sissoko were all involved in the 3-1 victory at Old Trafford, while McManaman is a veteran of the Legends friendlies and still a part-time coach in the academy.

Matt Parish, chief executive of the LFC Foundation, has promised “a host of new and exciting LFC Legends” for the clash, which suggests Keane will be followed by more fresh faces.

* Tickets for the Legends of the North charity match are on sale now priced at £27 for adults, £7 for juniors and £17 for over 65s. Tickets can be purchased online here.