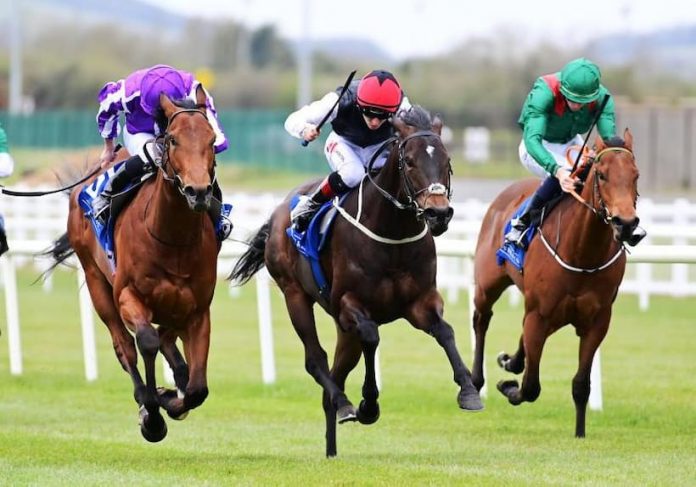 Little Big Bear continues to rise up the ranks after an ultra-impressive win in last Saturday’s Group One Phoenix Stakes at the Curragh and is now the clear favourite for the 2000 Guineas at Newmarket in 2023. However, before that the Aidan O’Brien-trained juvenile has got several options open to him this season, including an entry in this month’s Nunthorpe Stakes at the York Ebor Festival.

It was impressive stuff last Saturday at the Curragh as the Aidan O’Brien-trained LITTLE BIG BEAR powered home to land the Keeneland Phoenix Stakes by a remarkable 7 lengths.

Under jockey Ryan Moore, this exciting 2 year-old was always up with the pace and one-by-one fought off the challenges of Bradsell, who was sent off favourite, plus the Richard Hannon-trained Persian Force.

With Bradsell landing the 2022 Coventry Stakes at Royal Ascot his season and Persian Force winning the July Stakes at Newmarket – beating that pair by 7+ lengths looks high-class form.

Kieren Fallon told the Racing Post “I think he looks like next year’s Guineas winner. It’s a long way away, but Aidan [O’Brien] is a master and knows exactly how to take them along. If he takes the George Washington route, you could have a very short-priced favourite for next year’s Guineas.”

Housed at the powerful Aidan O’Brien yard, Little Big Bear will have a trainer that’s won Newmarket’s 2000 Guineas 10 times in the past – most recently in 2019 with Magna Grecia.

If Little Big Bear takes the 2000 Guineas route next season in 2023 he’ll be looking to become the first Phoenix Stakes winner since George Washington (2006), who was also trained by Aidan O’Brien, to follow-up in the Newmarket Classic.

The head of the betting for the 2023 Newmarket 2000 Guineas is dominated by the Aidan O’Brien and Charlie Appleby stables.

All odds correct as of 10:00 BST on Mon 8 Aug and subject to change

Where Next For Little Big Bear?

After the easy Phoenix Stakes win, there are now many options for Little Big Bear – including hoping an entry in this month’s G1 Nunthorpe Stakes at the York Ebor Festival (19th Aug).

With that race run over 5f, Little Big Bear would be dropping back a furlong, plus also taking on the older horses for the first time – he’s currently @ 7/2 with 888Sport in the betting for the Nunthorpe Stakes.

However, with O’Brien still not totally sure where Little Big Bear’s next race will be, it’s very much ‘watch this space’ stuff at the moment. What they can be sure about though is that they’ve got a very exciting prospect to look forward to for the rest of the season and then into the Classic year of 2023.

“Before the race we had a bit of a scare with him when he came up here. He kicked a wall and the clip of the shoe went into his foot. He was a little bit tender when the shoe was put back on.

“It could have gone either way very easily, so it was a great call by John Halley and Lynn Hillyer to let him run.

“Ryan said when he let him go it was all over. He’d been progressing from every run. He ran here the last day with the view of going for this race.

“He loves good ground so he can show his speed. It was a very good race, but he has serious class. From day one we thought he was a bit special.

“At Ascot we thought he would get away with five (furlongs) even though we were happy going six with him.

“He could go to the Middle Park or the Dewhurst.”

Already Have Accounts With Our Featured Bookies? Here Are 10 Up-and-Coming Bookmakers With Cracking Free Bets

See below our select list of some of the best horse racing betting sites – but totally trusted bookmakers, that will also have prices ahead of today’s horse racing from Ascot and York. Plus, best of all, they ALL also have ‘must-see’ free bet sign-up offers to take advantage of and by joining this will give you a wider range of bookmakers so you can get the best value when placing your horse racing bets.