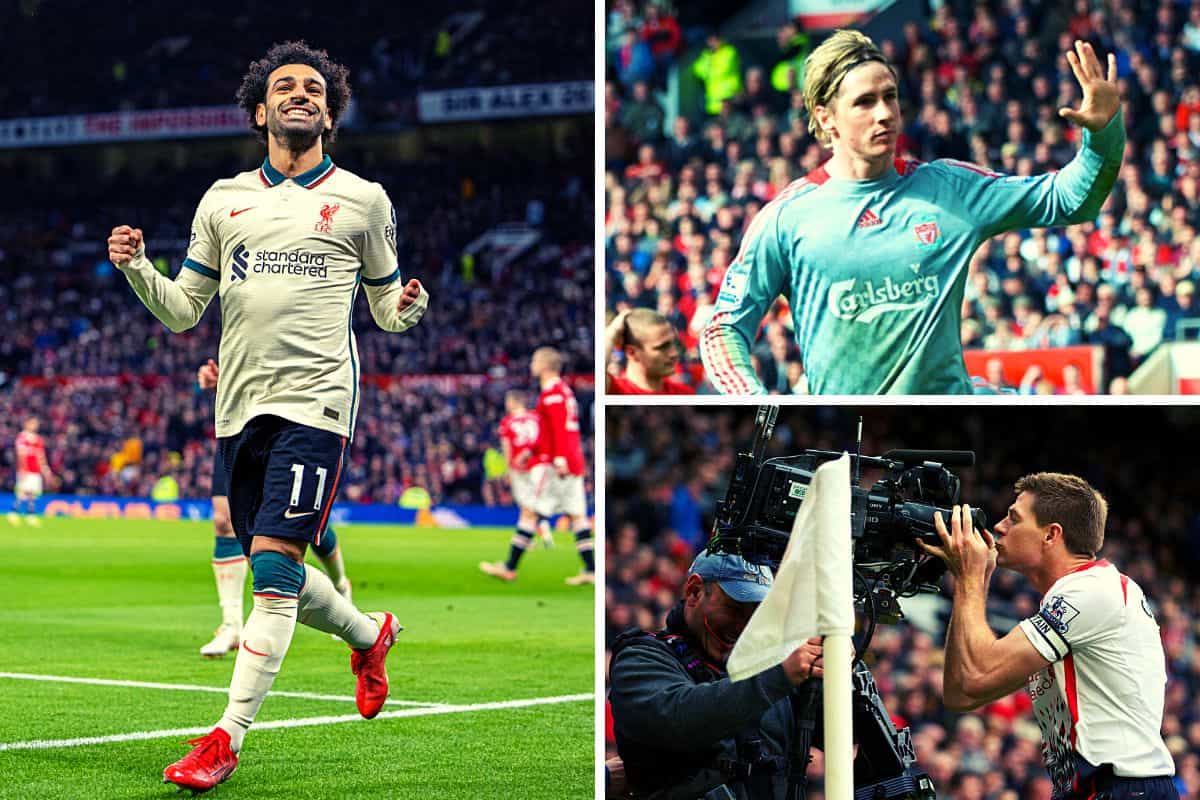 Some of Liverpool’s most memorable victories have come at the home of arch-rivals Man United, but which five were the most impressive?

The biggest match in English football.

When the fixture list is confirmed before every season, one of the very first games all Reds look out for is Man United away.

Old Trafford hasn’t always been the happiest of hunting grounds, but every victory Liverpool have managed there has been one to remember.

Here, we pick out our top five victories at Old Trafford.

It had also been more than a decade since Liverpool had won at Old Trafford.

That was why this victory meant so much.

It was Danny Murphy who secured the points, in what would turn out to be the first of three winners he would score away at United in the space of four years.

The midfielder’s excellent first-half free-kick was enough to end the Reds’ Old Trafford hoodoo once and for all.

A good day got even better for Liverpool when Luke Chadwick was sent off for bringing down Vladimir Smicer in the final minutes.

In a season when Liverpool’s Premier League title defence had been ruined due to injuries, this was the night Jurgen Klopp secured his first victory at Old Trafford. Unfortunately, there were no away fans there to celebrate, with the game played behind closed doors due to the ongoing Covid pandemic.

With Nat Phillips and Rhys Williams at centre-back, it would prove to be the result that inspired an excellent end to the season for Liverpool, who would go on to finish third despite their defensive injury crisis.

Liverpool initially went 1-0 down, with Bruno Fernandes’ effort going in off Phillips, before the big centre-back redeemed himself by setting up Diogo Jota for the equaliser.

Roberto Firmino added a second and a third either side of half-time, but Marcus Rashford’s goal made it a nervy final 25 minutes for the Merseysiders.

But on a night of firsts, Mohamed Salah secured a vital three points with his first league goal away at United.

One of the standout results in a season that had Liverpool dreaming of regaining the Premier League title from the Red Devils.

Daniel Sturridge and Luis Suarez terrorised the United backline throughout, and two Steven Gerrard penalties in each half put the Reds in control, the second of which prompted that classic Stevie G kiss of the camera.

And when Sturridge was brought down inside the box by a very angry Nemanja Vidic, who would subsequently be sent off, Gerrard had the chance to complete his hat-trick, only to hit the post.

Minutes later, though, Suarez wrapped up the victory with Liverpool’s third, before wheeling away to celebrate in front of the travelling Kop.

We all know what happened in the following weeks, but what a victory and what a day this was.

One of Liverpool’s most famous Premier League victories. We all remember where we were when Fernando Torres left Vidic on the floor and gave United fans the ‘five times’ treatment.

When Cristiano Ronaldo gave the home side an early lead from the penalty spot, the Reds were fearing the worst.

But the events that would follow were truly glorious. Torres levelled things up with that iconic equaliser, before Gerrard’s penalty put Liverpool in front before half-time.

15 minutes from time, it got even better. Vidic was sent off after bringing down Gerrard, who was closing in on goal, before Fabio Aurelio curled in a peach of a free-kick.

It doesn’t get any better than this. This was the day Liverpool took advantage of a United side in total disarray.

Four the of the Reds’ five goals came in the first half, with Naby Keita and Diogo Jota putting the away side in control, before a quick-fire Salah brace before half-time.

The Egyptian completed his hat-trick early in the second period, after latching on to a sumptuous pass from Jordan Henderson, before Paul Pogba was sent off 10 minutes later.

This was the tenth consecutive match Salah had scored in, at a point where there was simply nobody better than him in world football.

Less than a month later, Ole Gunnar Solskjaer was sacked, while Liverpool would go on to complete a domestic cup double. Oh how the tables have turned!

Manchester United have rejected a second bid from Arsenal for Alessia Russo. Last night the…