It has been a monumental day for the Anfield Road End expansion after the 300-tone roof truss was eased into place on Tuesday morning.

After a week’s delay due to weather conditions and an issue with one of the specialist cranes, the new roof truss was lifted into place early on Tuesday morning.

Two 600-tonne cranes, operating at 164 meters high, were responsible for lifting the steel structure into place before they were secured to two 60-tonne haunches on either end, with 25,000 bolts to hold them.

It is a significant step forwards in the redevelopment of the Anfield Road End, 10 months on from when work first started on taking the stadium capacity above 61,000. 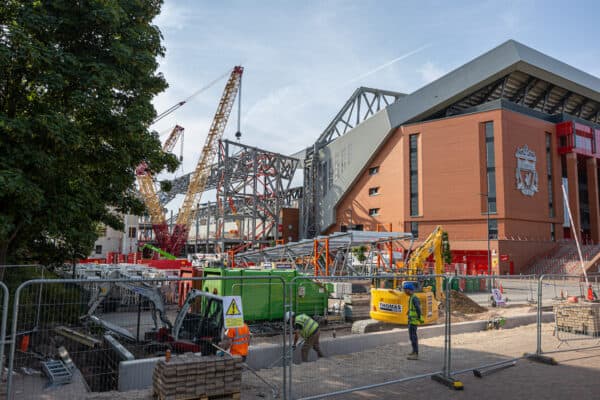 The process was one we have seen previously with the Main Stand when 650 tonnes of steel were hoisted into the air to dominate the skyline and move the project one step closer to completion.

Careful and precise planning, not to mention perfect weather, was needed for both lifts and that is why the Anfield Road End lift was delayed a little after initially being planned for the week before. 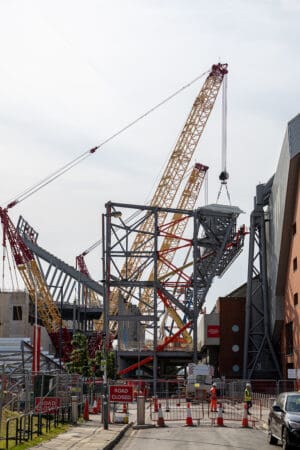 Thirty skilled engineers were involved in lifting the roof truss, a process to marvel at and an engineering feat that comes as a significant marker for progress, taking the club one step closer to seeing the existing roof removed.

That process of removing the existing roof is intended to be undertaken during the World Cup in November and December when Anfield will be vacant for up to six weeks.

Despite the slight delay with lifting the roof truss into place, everything remains on schedule and a year from now we should be seeing work complete.

The excitement is building and fans will be able to witness the progress throughout the coming season as the stand continues to take shape.